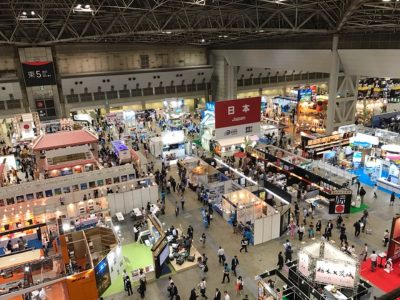 ‘Scale-up’ means extension of an event period from three days before to four days by adding one day for business sessions. For ‘proposal of new travels,’ the exhibition of overseas travel will offer five new theme-oriented areas. ‘Enriched international conferences’ will be joined by world’s tourism leaders.

Sellers and buyers for business sessions are expected to total 1,304, remarkably increasing from 991 last year, and business appointments to reach 7,450, increasing from 8,886 last year. Both of the figures exceed the initial goals.

TEJ Ministerial Round Table will be joined by tourism ministers from 20 countries and international tourism organizations including Japan Tourism Agency Commissioner and Tokyo Governor to share a wide variety of insights from them.

The welcome reception, which works as a networking opportunity between sellers and buyers, is expected to be joined by about 3,000 attendants. Japan Tourism Award will be held on September 20, and winners will be able to display winner marks. Travel showcase will have 527 exhibitors with more new domestic exhibitors from local DMOs, theme-oriented tourism organizations or different industries, increasing from 397 exhibitors last year. In parallel to TEJ, Inbound Tourism Business EXPO 2018 will open with 1.5 times wider area and more exhibition booths than a year ago.

In the overseas travel showcase, Hawaii tourism Japan (HTJ) will set up its independent exhibition pavilion for the first time in the last four years, offering the 4DX attraction theater experiencing natures in Hawaii with eight moving seats and the VR technology. Honda and Nextremer will jointly exhibit a tourist guide service for drivers, which is created by combining the Honda’s advanced navigation system and the Nextremer’s AI-based dialogue system. They place the exhibition as an important opportunity to obtain feedbacks from general attendants for the future commercialization. Honda will show up EXPO for the first time

Year-on-year comparison of visitors to Japan from Australia, U.S. and U.K. in June 2018